Click on recorded extracts tab above to listen to some items from previous Isca concerts/recitals.

STOP PRESS The prize-winning French horn player BEN GOLDSCHEIDER will be the soloist with the Isca Ensemble in the Exeter Cathedral Concert on Saturday 28th. October 2023. He will be playing the First Horn Concerto by Richard Strauss and some Mozart. 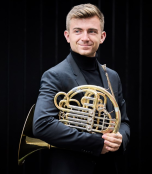 In the steppes of Central Asia

Now based at Sidmouth Parish Church.

Purchasing of tickets for all concerts.

Tickets are available in advance online at
www.iscaensemble.org.uk or www.ticketsource.co.uk

150 complimentary tickets are available for a fabulous recital in Topsham. The exceptionally gifted young musicians who will be presenting a programme of Beethoven, Chopin and Frank are Joel Munday (violin) from Devon and Lucas Krupinski (piano) from Warsaw. All welcome. Email Roger Hendy roghendy@gmail.com. for tickets.

Rossini : Overture 'The Barber of Seville'

Ist prize at the International Piano Competition in San Marino, 2016. In addition to the main prize, he received all the additional prices: the Audience Award, the Music Critics’ Award and the Orchestra Award.

Winner of numerous awards throughout Europe.

BORODIN : In the steppes of central Asia

Following a year of tuition at the Hochschule für Künste, Bremen from internationally renowned cellist, Alexander Baillie, Thomas Isaac is currently a postgraduate student with Christoph Richter at the Royal Academy of Music, supported by the Guilhermina Suggia Scholarship.

Thomas has won numerous prizes and competitions, including the North London Festival Cello Prize, the Norfolk Young Musician competition and the
Herbert Walenn Cello Prize at the Academy for a performance of Bach’s Cello Suite No.2 in D minor. He was awarded the Moir Carnegie Prize at the Royal Academy for his undergraduate final recital. He has participated in masterclasses with Steven Isserlis, Marc Coppey, Steven Doane, Philippe Muller and Menahem Pressler, the legendary pianist of the Beaux Arts Trio.

As a soloist, recent performances include Schumann’s Cello Concerto at
the Musique en Re Festival, Haydn’s Concerto No. 2 in D major with the Academy of St Thomas, Dvorak Concerto with the Sudbury Symphony, Penderecki’s ‘Per Slava’ at the Shanghai International Cello Festival, concerts at the Wigmore Hall and the Tivoli Festival Copenhagen with Rachel Podger, and chamber music by Colin Matthews at the BBC Proms, broadcast on BBC Radio 3.

As an orchestral musician Thomas has played principal cello with the City of Birmingham and Bournemouth Symphony orchestras and has appeared regularly in the 2017-18 season with the LSO as part of their string experience scheme. Also, a proficient baroque cellist, Thomas has played continuo in the Royal Academy/Kohn Foundation Bach Cantata Series. In 2019 he was appointed as Co-Principal of the Bournemouth Symphony orchestra. 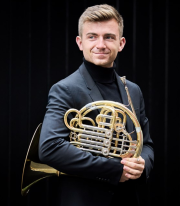 The prize-winning French horn player BEN GOLDSCHEIDER will be the soloist with the Isca Ensemble in the Exeter Cathedral Concert on Saturday 28th. October 2023. He will be playing the First Horn Concerto by Richard Strauss and some Mozart.

At the age of 18 Ben was a Concerto Finalist in the 2016 BBC Young Musician Competition. Since then he has made his debut at the BBC Proms, and appeared as soloist with the Mozarteum Orchestra in Salzburg, the Aurora, Britten Sinfonia, English Chamber, Royal Philharmonic, London Mozart Players, Lucerne Symphony, Manchester Camerata, Prague Philharmonia and Sinfonie Orchester Berlin. Ben is currently giving recitals at major concert halls including the Concertgebouw, Musikverein, Elbphilharmonie and Köln Philharmonie.